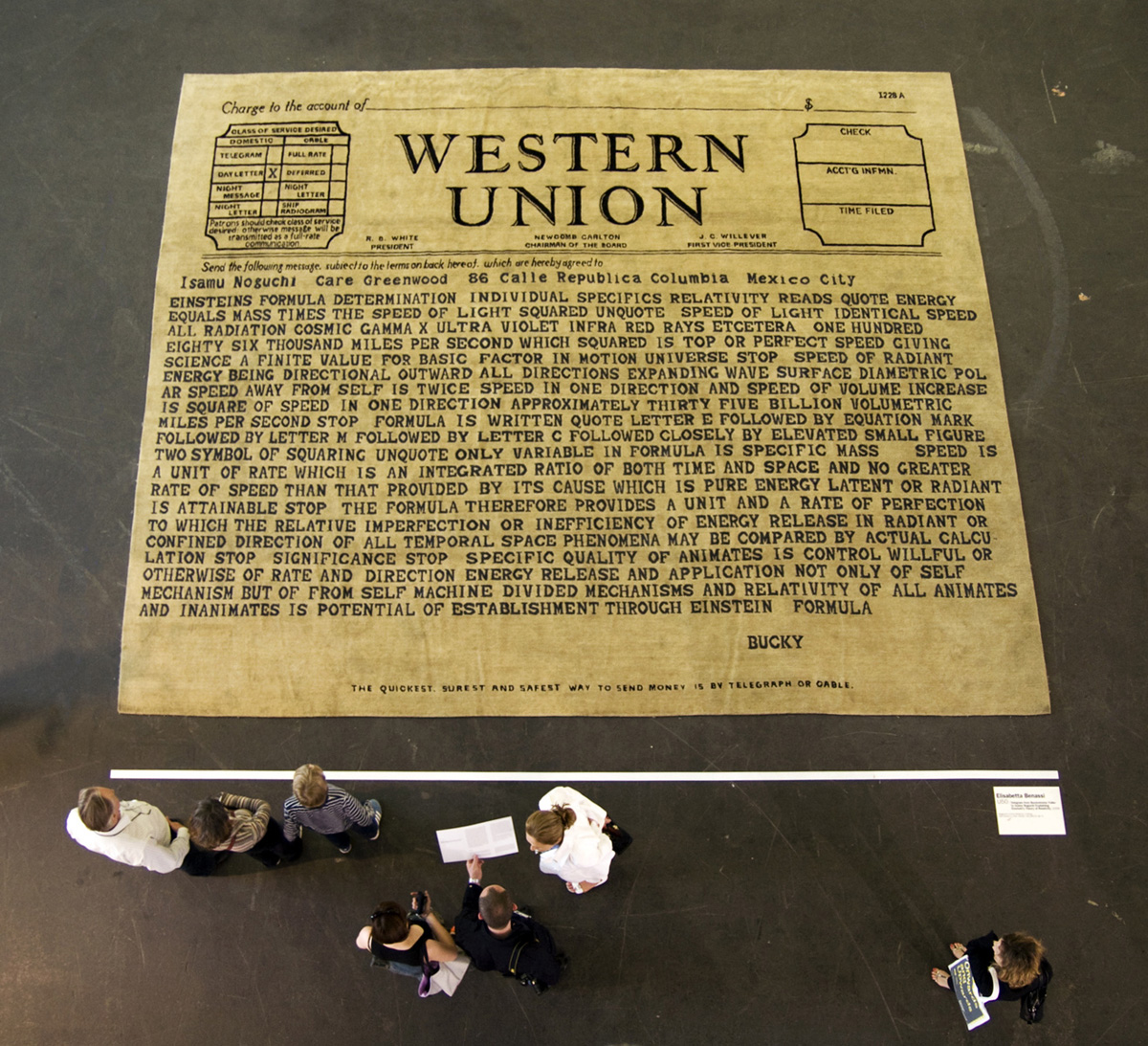 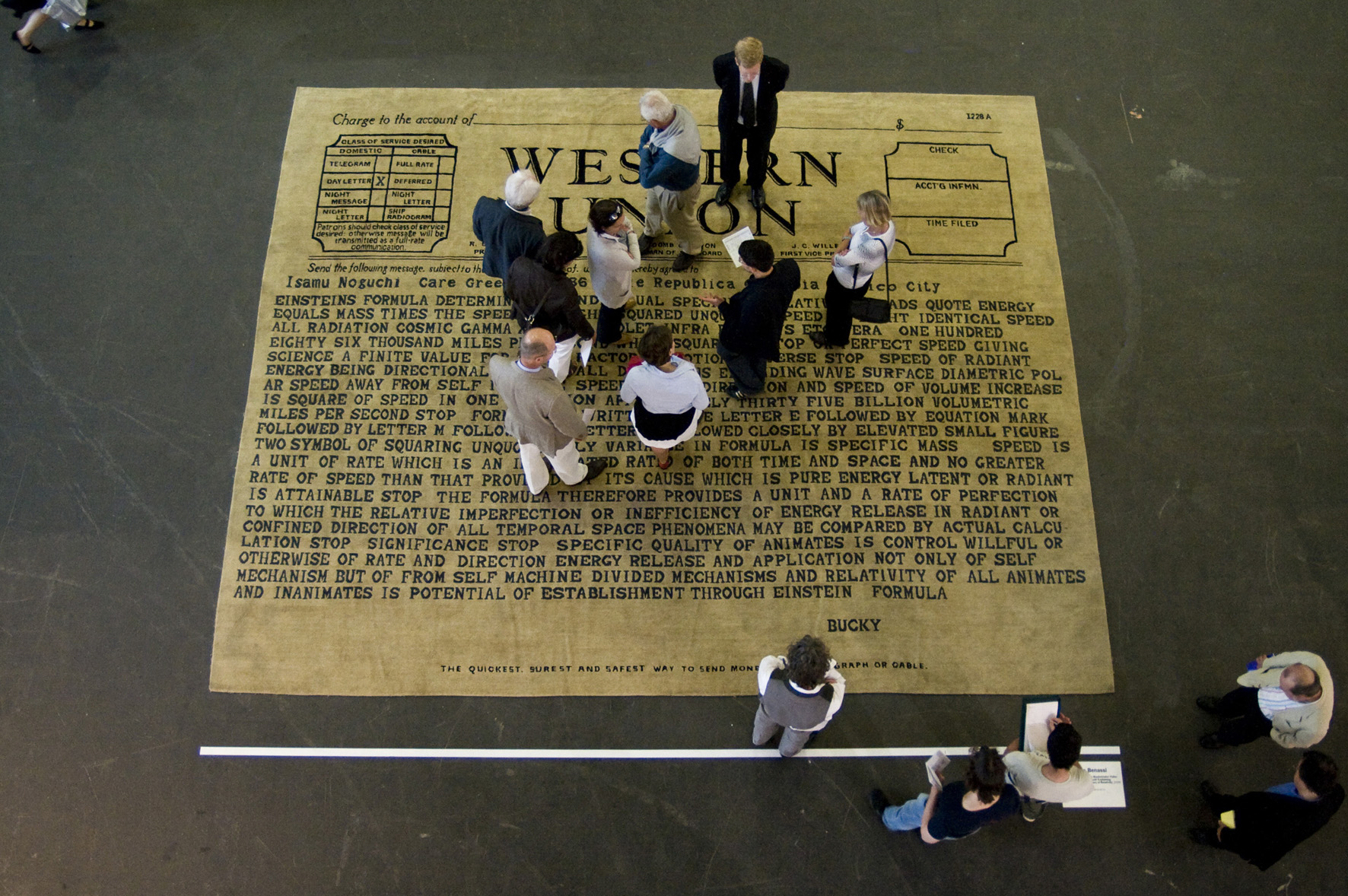 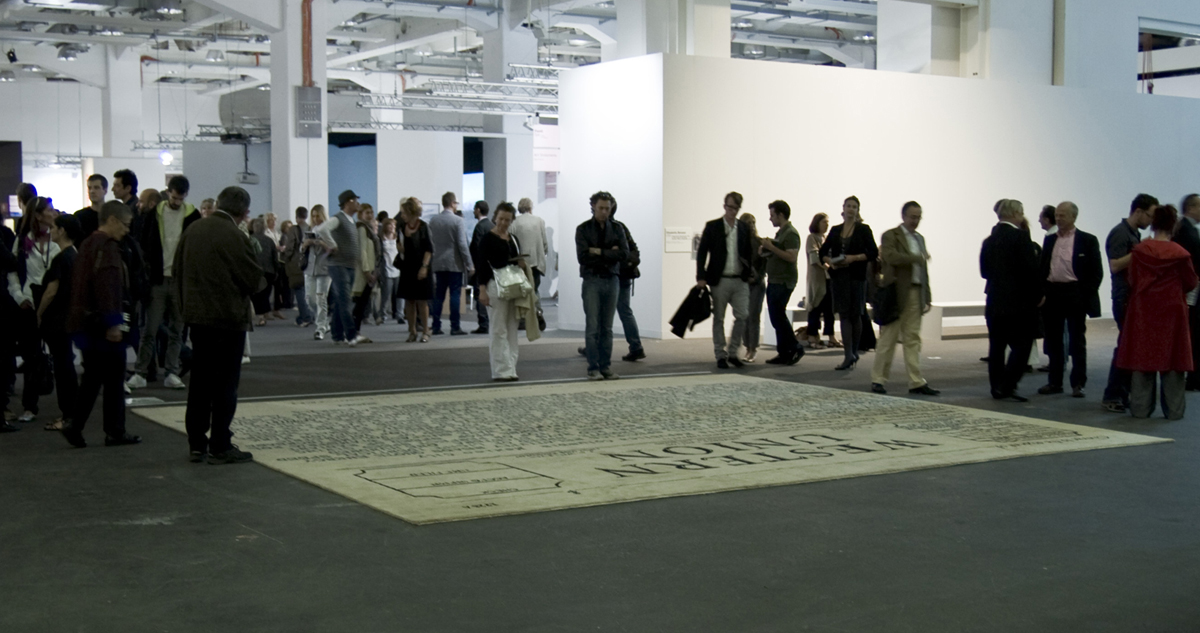 “Telegram from Buckminster Fuller to Isamu Noguchi Explaining Einstein’s Theory of Relativity is a two hundred fifty-word missive sent in 1936 from the architect Richard Buckminster Fuller to his friend Isamu Noguchi in Mexico City. The architect sums up the theory of relativity of Albert Einstein the sculptor wanted to insert in his bas-relief History Mexico at the Mercado Abelardo Rodríguez, a 22-meter work on the struggle against fascist oppression, featuring the most significant political and cultural symbols of the 20th century, including the famous formula E=mc2. The propagation of intellectual energy in time and space, the perpetual motion of thought, its non-linear but persistent trajectory: these are the themes the carpet of Elisabetta Benassi brings to Basel, 73 years after Fuller’s telegram. The message is no longer urgent: the need today, instead, is to put that equation that has changed history back at the center of discussion, and to ‘continue to ask ourselves, as then, about time and space, about our place in the world,’ as the artist says. The telegram fascinates her for its production and movement of energy, in both a constructive and a visionary sense; the interweaving of physics, engineering, architecture and art that taken to an extreme, beyond the limit, slides into intuition, in science as in life. In this way, the artist focuses on shifts, implications, connections that involve different subjects and create new meanings. The telegram has been re-found, re-interpreted, re-written and transformed into an environmental work, in a carpet woven in Kathmandu, Nepal.

The typewritten letters of the original, photographed and sent by e-mail by the artist, have been knotted by hand by artisans, becoming the starting point for something new, ‘an everyday object and a reminder, a signal transmitted by the 20th century of the modern utopias of the present era, a bridge between the Earth and the Universe,’ Elisabetta Benassi explains. Telegram from Buckminster Fuller to Isamu Noguchi Explaining Einstein’s Theory of Relativity thus becomes a device of propagation of thought that takes the relay baton and carries it to the next lap, where someone else, in turn, will bring it to another place, another time. While for Benassi the closest point of reference can be found in the letters, words, names of rivers that appear on the tapestries, carpets and drawings of Alighiero Boetti, the connection with other myths, visions, desires and utopias of the 20th century takes on, in this context of Art Unlimited, the meaning of a statement. The process continues, and perhaps what really counts is the path, rather than its destination, as Buckminster Fuller wrote: ‘I did not set out to design a house that hung from a pole, or to manufacture a new type of automobile, invent a new system of map projection, develop geodesic domes or Energetic-Synergetic Geometry. I started with the universe. (…) I could have ended up with a pair of flying slippers.’ Cloe Piccoli